Recently the Finance Minister announced progressive measures towards promoting cross-border trade. Many of these proposed changes stemmed from the recent signing of the African Continental Free Trade Agreement which is expected to come into effect on 1 July 2020.

This Agreement includes 55 member countries and is aimed to promote trade, investment and speed up development on the continent by allowing easier cross-border financial transactions. The African member Countries have agreed to cut tariffs, many to zero on 90% of the goods traded.

Existing legislation is administrative heavy and does not allow the free flow of goods due to red tape. South Africa will move from exchange controls to a capital flow management framework.

The concept of emigration through the Reserve Bank of South Africa will be phased out and replaced with a verification process. More emphasis will be placed on tax residency.

The Finance Minister has encouraged South Africans abroad to keep their ties with the country. One of the measures Government proposes is to remove the current exchange control treatment for individuals. This is a big step for Government as this will allow individuals who work abroad more flexibility with commerce transactions in South Africa. This will also provide a window for individuals to return to South Africa in the future and not sever ties permanently by formally emigrating, often referred to as financial emigration.

Under the proposed system, individual emigrants and South African tax residents will be treated identically. The additional restrictions on emigrants such as investing, borrowing and operating blocked bank accounts in South Africa will be repealed.

Many are led to believe, and understandably so by what they see in the media, that Reserve Bank emigration automatically removes you from the “tax net” in South Africa (and possible tax liability),  however this is not always true.  The Reserve Bank process is for exchange control purposes and not specifically connected to an individual’s tax residence. It is merely one factor to be used to determine tax residency.  Tax residency is objectively determined annually on a case by case basis.

For those individuals who departed South Africa many years ago to a country with a DTA and never notified SARS nor the Reserve Bank and in essence became a non-tax resident of South Africa by virtue of that treaty, the emigration process may not be needed after the proposed amendments unless you have a specific reason.

It is suggested that you should only follow the formal emigration process if there is clear intention and evidence that you will not return to South Africa. I.e. permanently cut all economic ties. Depart with the intention of returning only as a tourist.

Single Discretionary Allowance (SDA) of R1 Million for all purposes such as travel.

Foreign Investment Allowance between R1 Million and R10 Million will not require prior approval but will be subject to tax compliance.

Transfers of more than R10 Million will be subjected to a more stringent verification process. These transfers will trigger a risk management test that will include the source of funds, and ensure the individual complies with the anti-money laundering and risks associated with illegitimate financial transactions as prescribed in the Financial Intelligence Centre Act.

The current exchange control system will remain until promulgated into law. It has been announced though that this will be phased in by 01 March 2021.

“Exit tax” is important when considering taking up employment or relocating permanently to another country.  The change in your tax status from resident to non-resident can trigger this “exit charge” due to Section 9H of the Act being applied. A resident is deemed to have disposed of his or her worldwide assets on the day prior to ceasing to be a resident and then immediately reacquires them at fair market value as a non-resident (with certain asset exclusions).

Another factor to consider is that if you are still regarded as ordinarily resident of South Africa your foreign property at date of death may be liable for Estate Duty in South Africa.

For those tax residents working abroad under a contract of employment and qualify for the section 10(1)(o)(ii) exemption, the usual foreign employment income exemption (FEIE) will still apply. SARS have since raised the exemption amount to R1.25 Million per tax year as of 01 March 2020, all other qualifying criteria remain unchanged.

Please keep in mind that South Africa participates in the automatic sharing of individuals financial information between tax authorities around the globe, this forms part of SARS Common reporting standards. Many or most of you may have already received the “self-certification” forms to complete from your banks. It is important that your correct tax status is recorded with SARS as this may have tax implications.

Taxpayers who file their 2021 annual returns late will receive an administrative penalty on 1 December 2021. Previously a taxpayer would need 2 or more years outstanding in order to receive an admin penalty. This Read more… 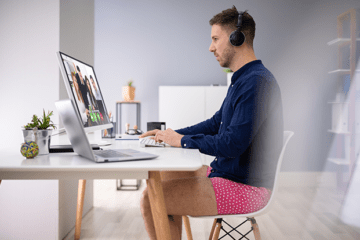 There is no doubt that the working environment is going to change after COVID-19. Open plan offices might well be a thing of the past for many corporates. Working from home can have its benefits such as Read more…